Just 58 miles south of Washington, D.C. resides the A. Smith Bowman Distillery.  It was an overcast Spring day that I made the trip to Fredericksburg, VA, the town located at the midpoint of the opposing capitals of the Civil War.  Most people come to visit the Civil War battlefields, but my purpose was bourbon.  In fact, they had just released another limited edition whiskey the day before, one that had sold out quickly in 8 hours, unfortunately for me.  But with that news behind me, I decided to enjoy the tour of the distillery as if the limited edition didn’t exist!

The A. Smith Bowman distillery just celebrated its 80th anniversary.  Licensed in 1935 by A. Smith Bowman, the distillery was originally located at the Sunset Hills Farm in Fairfax county outside of Washington, D.C.  In 1958, Robert E. Simon purchased most of the farm/distillery and in 1988, the distillery was moved to its current location in Fredericksburg, VA.  He moved it here because of the rising costs in the D.C. market.  The site was originally a cellophane factory that was used to wrap up cigars and cigarettes.  They were large when they moved, but in 2003 they were sold to another family and operates on a smaller basis now.

The tour guide for the afternoon was Erin, one of only 13 people that work at the distillery.  Erin explained the history of the distillery and its move to its current location.  She also went over all of the different spirits that they produce.  Here are some notes from the tour of the distillery: 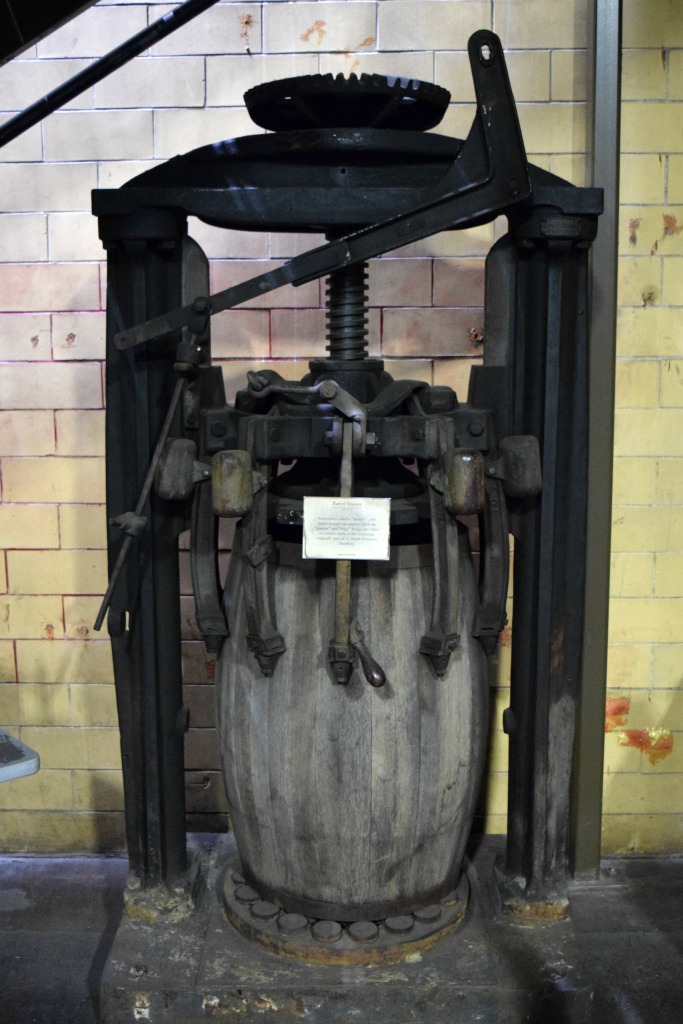 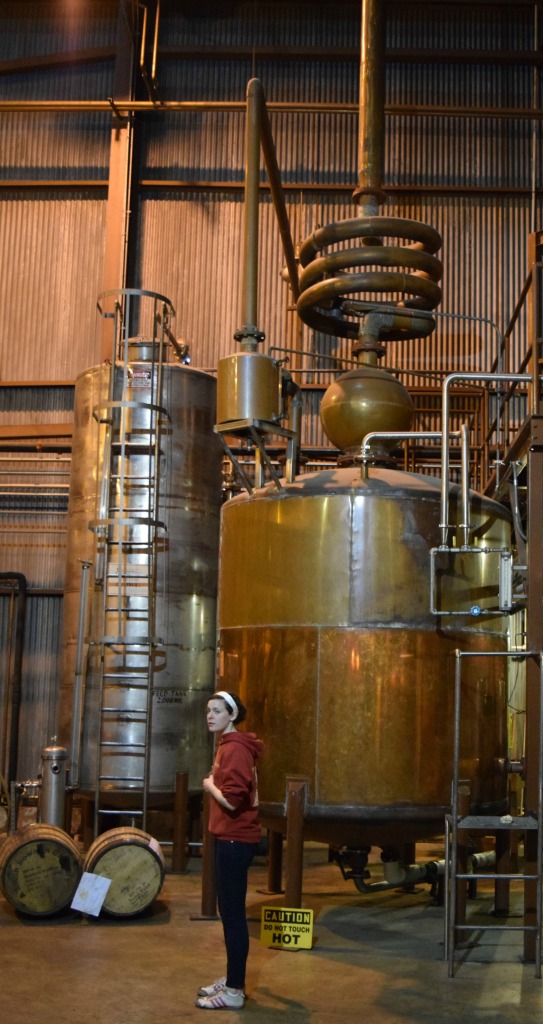 Erin was a great tour guide and gave a nice, comprehensive overview of the distillery and the process of making its whiskey.  It was nice to be able to go into all of the different rooms and see their style of production.  They definitely combine the old with the new.  I was amazed to see how many barrels they stored on site.  And the fact that they were stacked upright!

We gathered around the tasting table for the last part of the tour.  The first three spirits below were what we tasted, but listed after are the other products that they make:

Thank you to Erin for the great tour.  It was also nice chatting with the head distiller, Brian Prewitt, who started at A. Smith Bowman Distillery in 2013.  It seems like he has found a great place here at this distillery and based on the demand for the Abraham Bowman, he is making some great whiskey.

Charles’ Notes: It’s been a while since I visited a distillery that had close to 10,000 barrels on site.  Most of my time the last few months was spent visiting newer craft distillers in the Northeast, so it was refreshing to be back among the masses of American Oak.  The smell, the age, etc.  Obviously I was disappointed with not being able to get a bottle of the new Abraham Bowman, but in this day and age of bourbon mania, it’s best to get there on time.  Brian was great to talk to and learn about his history both at UC Davis in California and his time brewing in Colorado.  The A. Smith Bowman distillery is in good hands with his skills.  I look forward to getting back through Fredericksburg to see what is new in the future and will definitely time my visit better to arrive on the release date, not the day after.

Dram 22 of 366 for 2020! Redwood Empire Emerald Giant Rye Whiskey ......... I'm always curious about California whiskey. Originally from San Francisco, and now living in Upstate NY, it's not common that we get to try a lot of the California expressions. We reviewed this rye for a @9mapleave SuperBowl Whiskey Wednesday spotlight coming out next week. ......... It's an interesting rye. It takes spirit distilled in both California and Indiana (MGP) and ages it in Sonoma, CA. We know it's at least 3 years old and bottled at 90 Proof. On the bottle, they talk about naturalist John Muir who was inspirational in my upbringing as I spent a lot of time in the Redwoods in Muir Woods across the Golden Gate bridge in Marin. Very cool. .......... Notes Nose: light, spice, vanilla, potpourri Palate: more spice, some citrus, oak, fruit Finish: short to medium, oak, spice Balance: it's young, but is a decent blend of Indiana and California. Not as spicy as a typical MGP rye. Score: 84 ........... #366drams2020 #saratogawhiskeyclub #ryewhiskey #rye #whiskey #redwoodempire #sonoma #california #dramoftheday #dramagram #instadram #whiskeygram #whiskeytasting #whiskeyporn #whiskeytime #whiskeylover #tastingdram #instawhisky #whiskyfabric #whiskyfamily #saratogasprings #upstateny #cheers #9mapleave #9maple
Dram 21 of 366 for 2020! George Dickel Bottled in Bond Tennessee Whiskey 13 Year ........... So I did a Bourbon Class tonight at @9mapleave and we had a blast. This dram is technically Tennessee Whiskey, but thought it would be fun to add since it was #1 in Whiskey Advocate last year. And the guests really enjoyed it. It's interesting that it was ranked #1, but it does bring this category back in view on a larger level which is nice. ............ Living in Nashville for 5 years makes it always fun to revisit Tennessee Whiskey. ............ Notes Nose: chocolate, toffee, oak Palate: a lot more oak, toffee, corn, spice Finish: medium, dry, spice Balance: needed more, I thought it jumped around a little Score: 87 ............ #366drams2020 #saratogawhiskeyclub #tennessee #whiskey #georgedickel #dickel #dramoftheday #dramagram #instadram #whiskeygram #whiskeytasting #whiskeyporn #whiskeytime #whiskeylover #tastingdram #cheers #instawhisky #whiskyfabric #whiskyfamily #saratogasprings #upstateny #whiskeybar
Dram 20 of 366 for 2020! Journeyman Distillery Corsets, Whips and Whiskey Single Barrel Wheat Whiskey picked for the @saratogawhiskeyclub ......... So tonight was a fun night for the club. @kevin_the_journeyman came to Saratoga Springs to do a tasting for the @saratogawhiskeyclub that included a Barrel Pick that we are bottling. We should get 66 bottles of cask strength wheat whiskey from this barrel. Jim Murray gave this Whiskey 94.5 points! That's something, but as we know the Whiskey Bible doesn't tell it all. But we were excited to try these samples and #2 was the winner. It will be bottled at close to 122.7 proof. It's 100% organic Michigan wheat. ........ Notes Nose: light, sweet, some spice, nutmeg Palate: bold, syrupy, spice, maple, oak Finish: medium to long, bacon, syrup, pancakes, yum Balance: it's young, but pretty well balanced Score: 88 ........ #366drams2020 #saratogawhiskeyclub #whiskey #michigan #wheatwhiskey #organic #journeyman #journeymandistillery #dramoftheday #dramagram #instadram #whiskeygram #whiskeytasting #whiskeyporn #whiskeytime #whiskeylover #tastingdram #instawhisky #whiskyfabric #whiskyfamily #saratogasprings #upstateny #cheers #clubtasting
Dram 19 of 366 for 2020! Glengassaugh Revival ........ So this is an interesting story. Another old distillery brought back to life. Northwest of Aberdeen, Glengassaugh went quiet in 1986 after a long run. In 2009, the spirit started flowing again and this Revival is the first expression since this new start. I guess there are some bottles with whisky from prior to 1986 that I need to track down. This Revival is a non-Age Statement whisky. Bottled at 46%, this one was aged in Bourbon and Red Wine casks, then finished in Oloroso Sherry. ......... Thanks to @dan_graham for the dram in his Whisky Den!! ......... Notes Nose: definitely get the red wine and orchard fruits, sweet, spices Palate: spice, more orchard fruits, oaky, thin Finish: drops quickly, dry, raisins, oak Balance: a little all over, but impressive for a first expression Score: 85 ......... #366drams2020 #saratogawhiskeyclub #singlemalt #scotch #whisky #scotland #highlands #glengassaugh #dramoftheday #dramagram #instadram #whiskygram #whiskytasting #whiskyporn #whiskytime #whiskylover #sláinte #saratogasprings #upstateny #sláinte #cheers #instawhisky #whiskyfabric #scotchwhisky