A safari in Scotland is something most people would laugh at.  But in the Highlands of Scotland, about an hour north of Inverness, is a waterhole where a certain type of game can be viewed.  Giraffes.  A whole herd of them.  Tall and colored in copper.  Here at the Glenmorangie Distillery are the famous stills, the giraffe stills, which they say are the tallest in Scotland.  Set in a beautiful location outside of Tain, the Glenmorangie Distillery produces classic single malts using a number of types of casks.  These giraffes produce a lighter, cleaner taste, one that represents the beautiful location and air surrounding the Dornoch Firth and area around Tain.  There were no lions, just thirsty tourists!

The history of the Glenmorangie Distillery goes back to 1843 when the “Morangie” farm distillery was started by the Matheson brothers.  Malt wasn’t produced until 1849 and it wasn’t until 1887 that the Glenmorangie Distillery Company, Ltd. was founded.  The distillery was sold to two partners, Macdonald and Muir, in 1918.  The Macdonald family would run the company until 2004 when it was purchased by LVMH, a French multinational luxury goods conglomerate, headquartered in Paris, France.

Prior to our tour we had the opportunity to go walk to the shore banks at the base of the slope where the distillery overlooks the Dornoch Firth.  It is a beautiful spot and one where the warehouses filled with spirit get to rest and take in the fresh Scottish air and temperatures.  It is a great time to reflect and think about the long history that these distilleries have withstood.  It is also a great time to prepare you for the tour and the process from which their spirit is born. 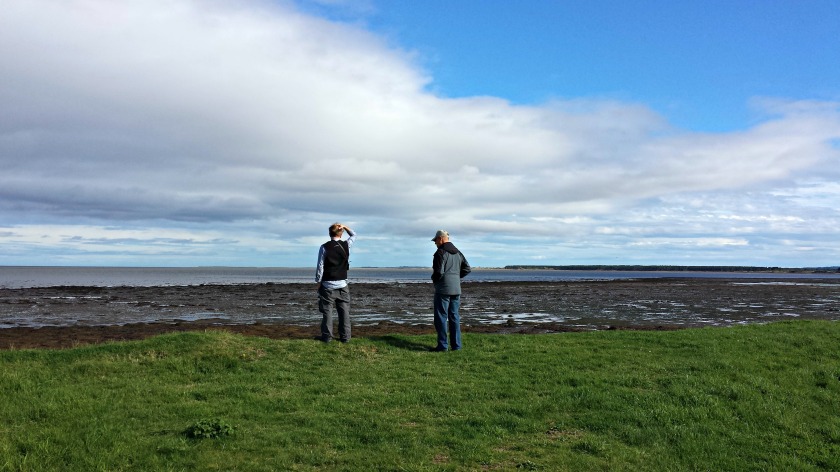 Our tour was led by Michael Fraser who started with a description of their famous icon, the Hilton of Cadboll Stone, a Pictish stone discovered on the East coast of the Tarbat Peninsula in Scotland.  This carving inspired the brand emblem and ties both the old skill and modern day skill of the Scottish people.  Michael led us through the distillery and here are the notes we took:

Overall, the tour was very informative.  Michael was able to answer our questions or guide us to someone who did.  At the end of the tour we had a tasting of the 10 year old.  It is the 4th most popular dram in the world and the 1st in Scotland.  We also paid to taste a couple of different other editions as well.

Charles’ Notes:  I wasn’t sure what to expect with Glenmorangie but I was very impressed.  The location is stunning and I think this is what stood out most about this visit.  Just to walk down to the shore and see the warehouses overlooking the water…  We were unable to take pictures inside which always is tough for me since I like to have these memories recorded.  But I understand that safety and liability is the number one priority at these highly-visited spots.  The giraffe stills were beautiful and definitely unique.  They had a nice little museum and gift shop.  I would like to come back to Glenmorangie one day and do the Heritage Tour and visit the springs and have lunch at the Glenmorangie House.